PKK Tuanku Bainun is a non-profit organization serving as a safe haven for children and youth from all walks of life to develop their creativity. Centred around the pillars of arts, heritage, culture, and the environment, our classes are made available at full sponsorship or subsidy to the underprivileged. We are proud to present this gripping story, with its stirring universal themes of resilience and the human spirit, in our KuAsh Theatre @ PKK Tuanku Bainun.com

Jomana, a Palestinian woman living in a Gaza refugee camp, falls in love with Rami, an American-born Palestinian doctor and activist who has just arrived on one of the first Free Gaza boats in 2008. Their love is met with relentless string of challenges. Ultimately, Rami must decide between returning to his comfortable life in Texas and staying in Palestine with Jomana. Choosing to stay means leaving his family and career behind for a life ravaged by war, while leaving means not only losing Jomana but also ignoring the plight of the Palestinians.

The play premiered simultaneously at Melbourne’s La Mama Theatre and Palestine’s Al Rowwad’s in 2014. Its sold-out premiere was met with standing ovations and critical acclaim. In 2016 the play was selected for the Victorian Certificate of Education Drama Playlist, and was remounted in Melbourne for a longer also sold-out season at La Mama, before it embarked on its first national tour, playing to full houses and standing ovations in Adelaide’s Bakehouse Theatre and Sydney’s Casula Arts Centre. 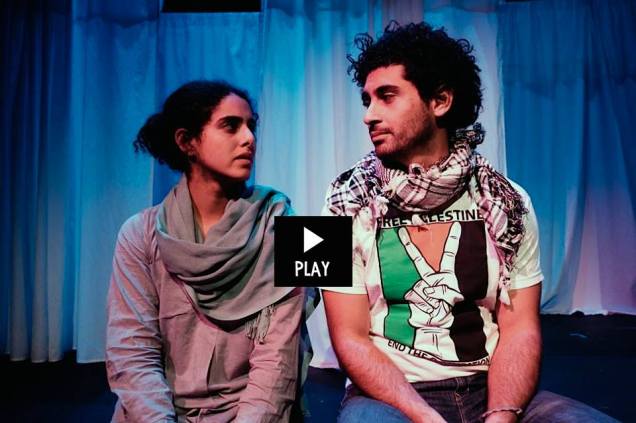 “Tales of a City by the Sea’ is a perceptive story that magnificently captures the drama of star-crossed lovers in the besieged Gaza strip.”

This is wide-eyed saga of everyday Palestinians struggling to survive and find normality, hope and love in a region affected by hostility. It is an oddly poetic tale, whose complexity and subtleties of differing narrative viewpoint are maintained by axioms, a strong multi-cultural ensemble and superb lead performances.

Samah Sabawi’s script has received widespread acclaim for its insight into Palestinian life. The playwright’s remarkable sensitivity and artistry confers enormous authority on this portrayal of a beleaguered people.

The play focuses on Jomana (Helena Sawires), a Palestinian woman living in a refugee camp, and depicts life under the Israeli bombardment and siege. She is chaperone to her cousin Lama (Emina Ashman), who is unhappily engaged to Ali (Reece Vella).

When Rami (Osamah Sami), an American-born Palestinian doctor, arrives on the “Free Gaza” boats in August 2008, he and Jomana fall in love. When it is time to leave, Rami promises to sell his clinic in America and return to Jomana and his ancestral homeland.

The play gives us a prophetic flavour of the way people can culturally, politically, ideologically and physically be separated. There are sharp, pertinent scenes in which the lovers speak over Skype and renew their promises. But will the pair live happily ever after?

This play stands or falls by its love affair between the thoroughly decent Texan doctor, Rami, and the poetically romantic Jomana. And this love affair has all the passion of desperate people in desperate times and precarious situations. Sawires is well cast; she puts presence into every scene and bounces well off Sami, who brilliantly portrays an American caught between multiple loyalties. Read more…

Samah Sabawi talks to Radio Adelaide about the play, the controversy, the overwhelming support and on being a Palestinian Australian writer.

Where there is a wall, there is also a city its inhabitants call home in the sacred and emotional way expected of communities deeply attached to their history and culture; especially those coping with just over half a century of war in all its guises and forms, greater or lesser, challenging their right to exist.

Samah Sabawi’s Tales of a City by The Sea is poetically beautiful, discerning and honest in its examination of life in Gaza.

No angry, politicised, locked in sensationalism to be found here, despite what has been said of this work during 2016. Sabawi’s play is an astutely balanced, modern appraisal of what it means to live as a Palestinian under siege.  Read more…

This is a tale of conflict and survival told principally through the stories of two couples during the 2008 Gaza war.

Jomana (Helen Sawires) is a Palestinian journalist in Gaza who meets American born Palestinian doctor, Rami, (Osamah Sami) who arrives on board one of small boats that breaks the Israeli blockade.

Ali (Reece Vella) and Lama (Emina Ashman) are residents of Gaza. He loves her but she’s unsure whether to marry him or not.

The play traces the development of these two relationships amid the death and destruction that is everyday life in Gaza.

Samah Sabawi has created a potent narrative that brims with raw examples of the reality of living under a hostile authority. She explores relationships and family values in a place where people fight to retain some sense of normality amid the daily death toll; where “funerals and weddings have become part of daily life”.   Read more

Samah Sabawi, writer of Tales of a City by the Sea, has written a play that delves into the lives of people in Gaza.  The production was assembled by a very culturally diverse team which focuses on the challenges of life and confronting barriers.

“Theatre needs to make you think. It should not brainwash you… if it makes you uncomfortable then that’s good, that’s really good theatre,” she said.

Tales of a City by the Sea will be at the Bakehouse Theatre from the 8th till the 18th of June.

To book tickets, head to www.bakehousetheatre.com

Image sourced by: The Bakehouse Theatre