A reading of the play Tales of a City by the Sea took place in Gaza city at the Qattan Centre for the Child followed by a discussion on January 17th  2013.   The reading was part of ongoing efforts by international artists to break the cultural siege of Gaza and to work collaboratively with local talent.  What resulted from this event was a profound experience for both the writer, the cast and the audience.  The audience feedback (video will be uploaded next week) highlighted the need for creating more space for cultural and artistic events in the besieged Gaza strip. 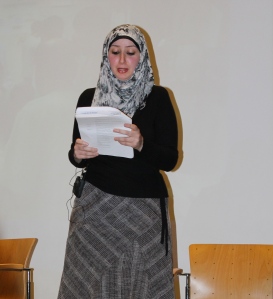 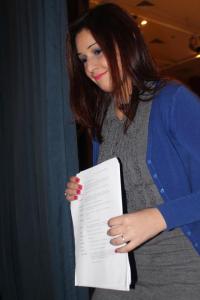 From left:  Mahmoud Hammad as Mohanad Alaa Shoublaq as Abu Ahmed, Mohammed Ghalayini as Rami and Ayman Qwaider as Ali. 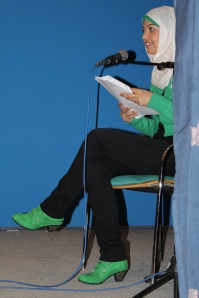 Eman Hilles was the narrator of our Tales. 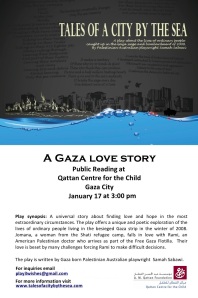 A play that explores the lives of ordinary people living in the besieged Gaza strip in the winter of 2008. Jomana, a woman from the Shati refugee camp, falls in love with Rami, an American Palestinian doctor who arrives as part of the Free Gaza Flotilla. Breaking the siege sparks their love – but can it be sustained?

To book online go to http://www.trybooking.com/BZDI

Tales of a City by the Sea is a unique and poetic journey into the lives of ordinary people in the besieged Gaza strip prior to, during and after its bombardment in the winter of 2008.

Jomana, a Palestinian woman who lives in the Shati (beach) refugee camp in Gaza falls in love with Rami, an American born Palestinian doctor and activist who comes on the first Free Gaza boats in 2008. Their love is met with many challenges forcing Rami to make incredible decisions the least of which is to take a dangerous journey through the underground tunnels that connect Gaza to Egypt.

Although on the surface this love story appears to explore the relationship between diaspora Palestinians and Palestinians under occupation, there is a broader and more universal theme that emerges – one of human survival and tenacity.

Tales of a City by the Sea avoids political pitfalls, ideological agendas and clichés by focusing on the human story of the people in Gaza. Although the play’s characters are fictional, the script is based on real life events and is a product of a collection of real stories the author Samah Sabawi and her family have experienced during the events of the past several years. Sabawi has written most of the poetry in the play during the three-week bombardment of Gaza in 2008/2009.

Rand Hazou was born in Jordan. His family are from Jerusalem. Rand is an Australian/Palestinian academic and theatre facilitator. In 2004 Rand was commissioned by the UNDP to travel to the Occupied Territories in Palestine to work as a theatre consultant running workshops for Palestinian youths. In 2009 Rand was awarded a PhD in Theatre and Drama at La Trobe University. His thesis examined the latest wave of political theatre in Australia dealing with Asylum Seekers and Refugees. In 2011 Rand was awarded a Cultural Leadership Skills Development Grant from the Australia Council for the Arts to develop The 7arakat|Harakat Project, involving a series of theatre-related initiatives between Australia and Palestine. As part of this grant, Rand travelled to Palestine in October 2011 to participate in an internship with Al-Kasaba Theatre in Ramallah. Rand is currently undertaking an internship with Multicultural Arts Victoria. As an academic he has taught across a wide variety of subject at La Trobe and Monash Universities. He is currently a lecturer and tutor in the theatre and drama program at La Trobe University.  For more information on the 7arakat project visit http://www.centreforcreativearts.org.au/projectspace/7arakat.phps

Osamah Sami is an actor and writer of Iraqi heritage. Born in 1983 in Iran – he migrated to Australia in 1995.  Osamah has worked extensively on stage, including playing the role of Saddam Hussain in “Saddam: The Musical”, as well as other productions, including Sinners (La Mamma), Homebody/Kabul (Theatre@Risk), Long Day’s Dying (La Mamma), Baghdad Wedding (Belvoir St.), Blackbox 149 (La Mamma)…His TV roles include East West 101 (SBS), City Homicide (Seven), Rush (Ten), Sea Patrol (Nine), series regular in the 13-part series Kick (SBS), the lead role in Tony Ayres’ award winning tele-movie Saved opposite Claudia Karvan, the lead in Dee McLachlan’s feature film “10 Terrorists” and the award winning short 296 Smith Street as well as the feature film Lucky Miles.  He is currently working on a feature film with director Tony Ayres “Ali’s Wedding” which he has co-written with Andrew Knight.

Since graduating from Flinders University Drama Centre, Veronica has had a very diverse and dynamic acting career in Theatre, Film, Television and Role Playing/Training across many arenas from mainstream theatre and television to educational and political theatre, script development and corporate work.  Her credits include: The Grace of Mary Traverse, Six Characters in Search of An Author, Stories from the Underground; A Translation in History, Twelfth Night, The Jungle of Cities, 10 x10 play series, Meat Pies and Mortadella, Nile Blue, GP, Water Rats, Heart Break High, Murder Call, Blue Heelers, Satisfaction, Whatever Happened To That Guy and Neighbours. 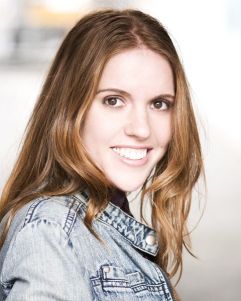 Hannah Norris is a widely acclaimed actress of the independent and professional stages of Australia. She is perhaps best known for her powerful performance of the one-woman show My Name is Rachel Corrie (Daniel Clarke) in Melbourne and Adelaide, receiving Adelaide Critics Circle and Victorian Green Room Award nominations, and the 2010 ATG ‘Curtain Call’ Award for Best Female Performance. Hannah has recently returned to Melbourne from a national tour of David Williamson’s Let the Sunshine (Hit Productions) and is currently working on a 2013 production of Tahli Corin’s One for the Ugly Girls. For more info, go to www.hannahnorris.com.au

Wahibe Moussa is a performance-maker, writer and Green-Room award winning actor, currently studying in the Master of  Writing for Performance at the Victorian College of the Arts. She has gained respect as a Cultural/Language Consultant through Theatre and television projects.  Wahibe’s writing practice is informed by her work with diverse Refugee and Indigenous communities, and her interest in connections between the personal and political; the exchange of power within relationships.  As a Community Artist, Wahibe works collaboratively in Theatre, Visual Art and Writing Projects in Melbourne and Sydney.

Jomana Najem has a background in Film Production and literary journalism, and has been extensively involved with the Arabic speaking community for the last ten years in various capacities.  Jomana has also written, directed and produced several short films and documentaries. She has worked both behind and in front of the camera as an actor and television presenter. She has is the writer of a feature length film script that centres around the lives of several Lebanese Australians, and their struggles to overcome their past. “The Borrowed Prophet” is currently in pre-production and has been endorsed by the Lebanese and wider Arabic speaking community.

Majid Shokor is a writer, researcher, and actor for stage and screen.   Originally from Baghdad, he lives and works in Melbourne.  Since his arrival in Australia in 2001, he has appeared in many plays, short films, TV series and the feature film Lucky Miles, for which he was also the cultural consultant.  He worked with many acclaimed directors and writers such as Jean-Pierre Mignon, Daniel Keen and Nigel Jamieson to name few.  His performances have received critical acclaim and been honoured with two prestigious Green Room Award nominations for Best Actor in Independent Theatre, in 2005 and 2009.  Majid holds a Master degree (Honours) and a Post-Graduate Diploma (1st class Honours) in Community Cultural Development from the Victorian College of the Arts – Melbourne University

Ryan is a second year student and is currently studying arts at La Trobe University. He has been involved in many highly successful productions in their student theatre program. He has also been highly involved in amateur theatre companies in his home town. He has a large background in musical theatre. This is Ryan’s first production outside of his university and local area.

Beth is no stranger to the world of theatre, television and drama; having worked on the TV show Neighbours as well as various other films. Most recently she played the character of Amy March (the youngest sister) in the  production ‘Little Women’.  ‘Tales of a City by the Sea’ is Beth’s first technical gig, she is currently completing a degree in English and Drama Majors.

James Crafti is co-manager of Under the Hammer an Activist Artists Hub in Coburg a place he founded to explore art within a social justice framework. Crafti completed a Bachelor of Creative Arts at La Trobe in 2009 and directed plays at La Trobe including Creationism, Rope and Seven Jewish Children. In 2010 James worked as an assistant director on Melbourne Worker’s Theatre’s show Yet to Ascertain the Nature of the Crime. Crafti also directed two plays with Platform Youth Theatre Mutha and The Deserters, and is now serving on Platform’s Board. He is currently undertaking his Masters in Community Cultural Development at the Victorian College of the Arts.