TALES OF A CITY BY THE SEA is a multiple award-winning play by Samah Sabawi about life and love in the besieged Gaza strip. It premiered simultaneously in 2014 in English at Melbourne’s La Mama theatre (directed by Lech Mackiewicz) and in Arabic at Palestine’s Al Rowwad (directed by Abdelfattah Abusrour). Its sold out premiere was met with nightly standing ovations and critical acclaim. In 2016 the play was remounted and it was listed on the Victorian school curriculum as part of the Victorian Certificate of Education Drama Playlist, triggering a hyperbolic attack by the pro-Israel lobby groups to have the play removed. The attack was vicious, with B’nai B’rith’s Dvir Abramovich accusing the playwright of anti-semitic depictions – a false claim that was easily refuted. Fortunately, support for the play was overwhelming as theatre makers, teachers, writers, journalists and so many others stood up in support of freedom of art and expression and the right of Palestinian voices to be heard without the heavy handed intimidation of the Israeli lobby groups. As a result, the play was remounted in Melbourne for a longer also sold-out season at La Mama, before it embarked  on its first national tour; playing to full houses and standing ovations in Adelaide’s Bakehouse Theatre and Sydney’s Casula Arts Centre.  In 2017, Tales of a City by the Sea sold out an entire season in Kuala Lumpur’s Pusat Kreatif Kanak-kanak Tuanku Bainun.  The play won two Drama Victoria awards for best new Australian publication for VCE And best performance by a theatre company for VCE and was nominated for best Independent Production by the prestigious Green Room Awards. In 2019, Tales of a City by the Sea had its first Canadian production at the  Centre for Drama, Theatre & Performance Studies at University of Toronto. The play had its Canadian premiere in December of 2019 at Theatre Passe Muraille in Toronto. 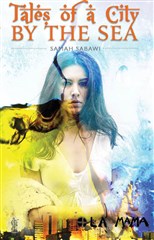 “This gripping play is an act of resistance that implores its audience to take heed.” The Age

“Searing stuff…Samah Sabawi’s play Tales of a City by the Sea is a brave work…. not only reflecting but also possibly affecting our view of this seemingly intractable conflict…The drama is played out well, and in the lead roles Osamah Sami (Rami) and Helana Sawires (Jomana) ..are both clearly deeply invested in the work.”
Peter Burdon – The Advertiser

“Sabawi has created an enthralling landscape and peopled it with believable characters. It looks beyond the political to examine the effect of war on those who cannot leave the battleground. It’s a gripping piece of theatre that begs to be seen and heard. “
Tony Busch – Adelaide Theatre Guide

“The profound grace of this production lies in the honest and forthright manner of Sabawi’s writing…. Added to that is Lara Week’s very simple and beautifully utilised set…alongside Shane Grant’s simple, polished lighting design and Khaled Sabsabi’s superbly crafted realist sound design. Sabawi’s play is an astutely balanced, modern appraisal of what it means to live as a Palestinian under siege.”
David O’Brien – Barefoot Review

“Samah Sabawi’s script is an eye-opening look at the daily drama of life and love in a war Zone where random missiles end lives. With music, poetry, harsh reality and hope, the excellent ensemble presents the Palestinian perspective and shows that life does, and must, go on.” 4 STARS
– Matt Byrne – Sunday Mail

“Tales of a City by the Sea is a perceptive story that magnificently captures the drama of star-crossed lovers in the besieged Gaza strip…. a strong multi-cultural ensemble and superb lead performances…. fine theatre well worth watching.”
Stephen Davenport – Indaily

“Despite the pain and despair that is palpably conveyed by this story, the bravery and humour of these ordinary people carries an overriding message of hope that reassures us of one thing – the resilience of the human spirit….the play is now on the Victorian Certificate of Education syllabus.”
Julia Wakefield – Weekend Notes

Tales of a City by the Sea is the story of two people who meet and fall in love in the besieged Gaza strip, woven together from the actual experiences of people living under occupation.

Jomana, a Palestinian woman living in a Gaza refugee camp, falls in love with Rami, an American-born Palestinian doctor and activist who has just arrived on one of the first Free Gaza boats in 2008. Their love is met with relentless string of challenges. Ultimately, Rami must decide between returning to his comfortable life in Texas and staying in Palestine with Jomana. Choosing to stay means leaving his family and career behind for a life ravaged by war, while leaving means not only losing Jomana but also ignoring the plight of the Palestinians.

13 thoughts on “Are your loved ones trapped behind the wall?”